Esfandiar Adena was the BBC Media Action Fellow at the Reuters Institute for the Study of Journalism (RISJ) in Spring 2013, where he conducted a research project on social media and governance in Tajikistan.

On 6 November, Tajikistan will elect its president. The run-up to the election has proved a milestone for social media networks in the country – with fierce political debate taking place online and opposition leaders using social networks to call for a boycott of the election.

Although internet penetration is low in Tajikistan compared to its Central Asian neighbours, the level of political debate on social media platforms – on Facebook in particular – is higher than in Uzbekistan and Kyrgyzstan.

Traditional media in Tajikistan is either controlled by the state or not highly advanced, so the internet has emerged as the only place people can find alternative news and, even more importantly, add their voice to the debate.

Social networks’ potential to reach the more than one million Tajik migrants working abroad – whose remittances amount to roughly 47% of Tajikistan’s national GDP – is also changing political debate within the country.

One major complaint taken up by activists and ordinary Tajiks on Facebook was a decision by the Central Election Commission (CEC) about how Tajikistan’s migrants could nominate presidential candidates.

The Commission ruled these migrants could only nominate candidates by providing a signature. And these signatures had to be approved and stamped by the heads of their home districts and towns in Tajikistan – a physical impossibility for a migrant working abroad.

In addition, the number of polling centres available to the estimated 1m – 1.5m Tajiks working abroad has come in for online criticism. According to Tajik law, there should be one polling centre for every 3,000 people.

The election commission has said most of what they call “seasonal migrants” would return to Tajikistan for the election but, in the face of widespread criticism on local media and social networks, they have said around 200,000 migrants will remain in Russia alone – where there will be 24 polling centres.

Opposition leader Rahmatillah Zayirov of the Social-Democratic Party used Facebook to respond to the CEC’s actions and called for a boycott of the election.

Many Facebook users responded by replacing their profile pictures with an image from the boycott campaign. 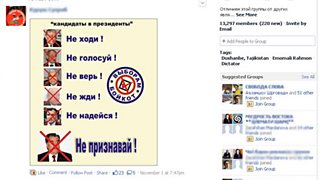 Critics of the government have also used social networks to attack the authorities’ decision not to create an electronic voters list.

Islamic Rebirth Party analyst Hekmatollah Sayfollahzadeh told me via Facebook that an electronic electoral roll would have made it easier to register voters and could prevent fraud and increase transparency during the election.

In the days before the election, this issue has gained even more attention online. Human rights activist Fayzinissa Vahidova wrote on Facebook: “For the first time after since the collapse of the Soviet Union, I received an invitation letter to election. However, they brought invitations even for my children, who study abroad and can go to a Tajik embassy to vote. They even brought invitations for a person who hasn’t been a Tajik citizen for more than a decade.”

In the run-up to this election, therefore, social networks have allowed opposition activists to reach out to voters within and outside Tajikistan. 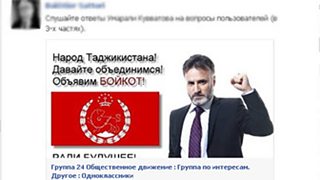 Dadajan Atavollayev, dissident journalist and leader of the opposition Vatandar Movement, said, “If each labour migrant calls back to his family in Tajikistan and asks five other members not to participate in election or vote against Mr Rahman, it would be a real blow to Mr Rahman’s government.”

Tajikistan’s migrants are their families’ real bread earners and economically, they could be major players in the country. But we shall have to wait and see how, through social networks, they could also start to flex their political muscles.